LUTS are broadly grouped into symptoms to do with storing or passing urine. You might have symptoms linked mainly to one or the other, or a combination of both.

What are the symptoms of LUTS?

How common is LUTS?

LUTS becomes more common as you get older. It can happen when you’re young, but the cause of the problem is likely to be different.

A large Australian study has shown that about one in 14 men in their 40s, and nearly one in three men over the age of 70, report moderate to severe LUTS.

If it’s painful for you to urinate, your LUTS might be caused by a urinary tract infection, or an infection and inflammation of the prostate gland (prostatitis). But your symptoms might also be because of an overactive bladder.

This type of LUTS might mean that you have an underlying chronic medical condition, such as obesity, diabetes, high blood pressure, or obstructive sleep apnoea. It could also be because of the effects of smoking.

Drinking fluids late at night, having too much alcohol or caffeine, or low levels of physical activity, can make storage symptoms worse.

Symptoms connected to problems with passing urine are usually due to a blockage that makes it more difficult for you to pass urine. This could be caused by an enlarged prostate gland, or scarring of your urethra (the tube that carries your urine from the bladder to the tip of the penis).

Other causes of LUTS include some medicines, and diseases such as stroke and Parkinson’s disease.

LUTS is also linked with depression and erectile dysfunction. It’s common to have a number of things that are causing LUTS, so it’s not always easy for doctors to find the exact cause.

Can LUTS be prevented?

You’re less likely to get LUTS if you have a healthy lifestyle and body weight and if you’re a non-smoker.

You’re more at risk of getting LUTS if you’re having treatment for any medical conditions such as diabetes, high blood pressure or sleep apnoea.

LUTS isn’t just a normal part of ageing, so it’s a good idea to see your doctor if you notice any changes to urination - particularly if the symptoms are affecting your quality of life or interfering with normal daily activities.

Your doctor will confirm whether or not you have LUTS based on your symptoms, but you’ll need further tests to work out the cause. This generally starts with a thorough medical history and examination.

If you have LUTS, reducing caffeine and alcohol (these substances can irritate the bladder), avoiding large amounts of fluid before bed, preventing constipation (straining to pass stools can affect pelvic floor muscles, which are important for both bowel and bladder control), and losing weight might help to improve the symptoms.

Your first steps will be to make changes to your lifestyle, such as being more active and reducing the amount of refined carbohydrates you eat, and managing other health conditions such as obesity, diabetes, hypertension or sleep apnoea.

If your symptoms are heavily impacting your quality of life, oral medicines can help. Surgery is only done in severe cases of prostate enlargement or other serious causes.

Things to think about before your appointment 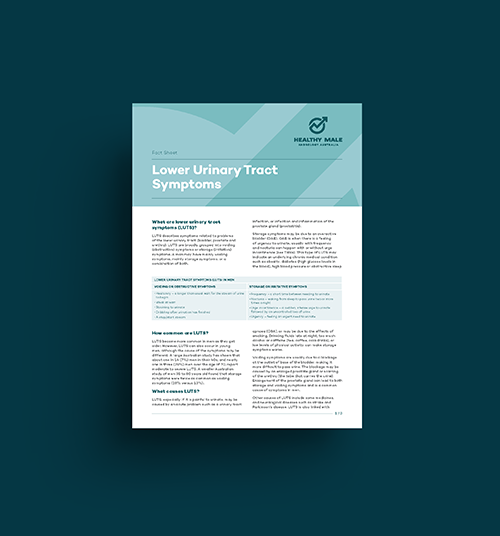 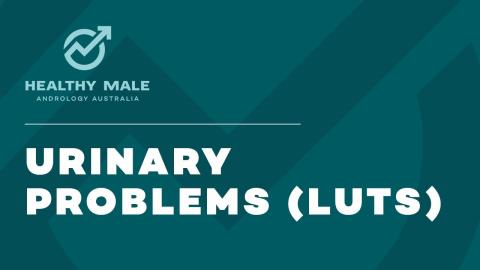