Disability, men's health and the barriers to better care 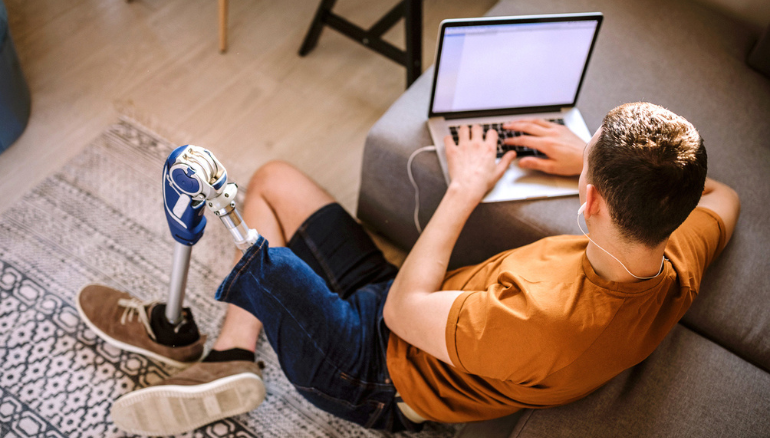 One in six Australians has some form of disability[1] but almost everyone will experience disability at some point in their life, whether it’s only temporary or permanent. Despite how common it is, we still have work to do on how disability is perceived, represented, respected and supported.

Disability is the interaction between individuals with a health condition (such as vision impairment, mental illness, or cerebral palsy) with personal factors (such as age or sex) and environmental factors (such as community attitudes and accessibility of services). Disability is not simply having a certain impairment that’s disabling but how the impairment interacts with barriers to participating in everyday life. These can include anything from a lack of wheelchair accessibility in a workplace to minimal representation of people with a disability in the media, stereotyping by society to systemic discrimination. The population of people with disabilities is incredibly diverse and people are affected in very different ways.

For almost 75% of people with disability, their main health condition is a physical one1. Nearly 30% of these are related to musculoskeletal disorders, which affect muscles, nerves, tendons, joints, cartilage, and spinal discs (such as rheumatoid arthritis, back pain, and osteoporosis)1. They’re the leading contributor to disability worldwide[2] but most people aren’t aware of the extent of these conditions or the impact they can have on people’s lives.

“Often there’s no visible sign of the pain and suffering caused by musculoskeletal conditions; hence the general population is mostly unaware of their impact,” Rob says. “These conditions really are invisible.”

Paul Klotz, 62, who lives with a musculoskeletal disability, a functional neurological disorder, epilepsy, chronic pain and mental illness, as a result of significant and complex trauma, says the loss of freedom is a “silent killer”.

“Not being able to drive, not being able to have the capacity or the freedom to go and do things… people don’t take enough time to consider what it’s like for people to walk in those shoes,” he says.

For some men, society's expectations of what it means to be a man can impact health outcomes for those with musculoskeletal conditions.

“We’ve been conditioned not to express, not to cry, not to show emotions, not to discuss, not to open up, and so where people may develop a basic or an introductory type of musculoskeletal condition, it can very quickly turn into a disability because they’ve not had the confidence, the strength to go and talk to someone, to appear weak,” Paul says.

“Making men aware of the many musculoskeletal conditions that could affect them, including their symptoms and risk factors, and empowering and supporting them to seek help is a good first step,” Rob says.

Awareness and attitudes amongst able-bodied people are critical for how people with a disability live. These attitudes influence how people act toward those with a disability, whether that’s an interaction between strangers on public transport or a politician creating policy. Negative attitudes disempower, exclude and discriminate against people with disabilities. Attitudes are closely related to ableism – discrimination or prejudice against people who have disabilities based on the belief that typical abilities are superior.

“It's going to take... really generations before we see [change] really manifested in wider society,” he says. “It'll take more people like Jordan [Steele] being elected [to parliament] and more people like Dylan [Alcott] getting Australian of the Year.”

The diverse lived experience of people with a disability has not always been well represented in disability policy, something that’s not only beneficial for the policy outcomes but social inclusion.

“You need more lived experience people in roles, be that in government departments, in private organisations and not-for-profit charity organizations, in policy areas, in strategic areas, in the operational areas, be that as mentors, advocates, consumer advisory groups,” Paul says. “There are so many things that we can contribute through our existence, there's only so much you can learn from a textbook, but it's a hell of a lot more you can learn from someone who's actually walked in those shoes.”

“For those living with musculoskeletal conditions, they also need support to live full and productive lives,” Rob says. Their national survey showed people with a musculoskeletal disability need:

Support so they can work

Affordable services and financial assistance to get the care they need

[1] Australian Institute of Health and Welfare. (2020). People with disability in Australia. Retrieved from https://www.aihw.gov.au/reports/disability/people-with-disability-in-australia

[2] Musculoskeletal conditions. (2022). Retrieved 12 May 2022, from https://www.who.int/news-room/fact-sheets/detail/musculoskeletal-conditions