Understanding the mental health of men living rurally and remotely 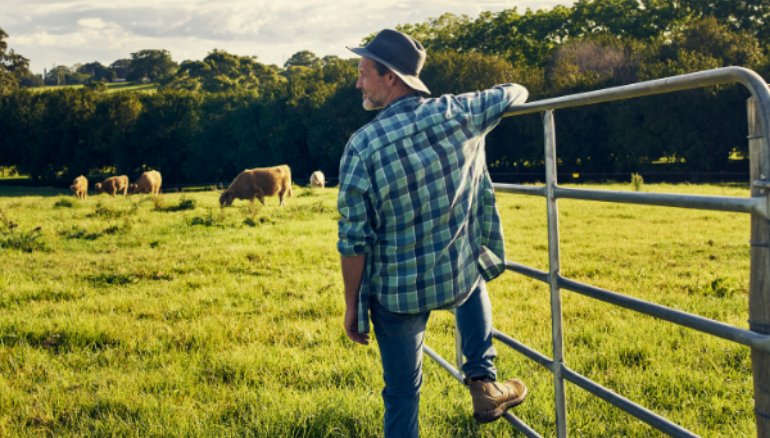 From farming land to Indigenous communities, coastal towns to mining settlements — there’s no single, stereotypical experience of living in rural and remote Australia. But these roughly seven million Australians share commonalities in the challenges they face to their mental health, including geographic isolation, limited access to healthcare, financial insecurity and environmental adversity. Although the prevalence of mental illness in people living outside of the major cities is similar to those living in them, the rates of self-harm and suicide are considerably higher in rural and remote areas and increase with remoteness[1].

“Getting to a place where suicide's an option, it's not a good place”

Warren Davies, who goes by The Unbreakable Farmer, moved from Melbourne to rural Victoria as a teenager and took up farming after finishing school. One of the biggest catalysts for his mental health journey was mother nature, who he refers to as a silent business partner on his dairy farm.

“We got flooded fence line to fence line while we were establishing our family business. It had a major impact on us financially and the stress triggered some of the stuff I’d swept under the rug from the past,” Davies says. “I didn't give that enough attention and just got on with the day to day and that’s not the best way to deal with a mental health challenge, by working harder and keeping going.”

After recovering from the flooding, managing family conflict and taking on more debt added significant stress. Then the drought hit.

“I was on a downward spiral, and it just kept getting worse as the drought got on. I started to feel shame and guilt that I was failing again,” he says. “I felt like I was letting my farm down, letting my animals down, letting my family down and I just spiralled out of control until I got to a really dark place and just didn't know how to get out of it.”

“Breaking down the stigma is probably the biggest thing”

Mary O’Brien has spent her whole life in rural and remote Australia, working in the agriculture industry, and was driven to start rural men’s mental health initiative Are You Bogged Mate? after losing a number of men to suicide in her local community.

“Country people identify with getting bogged and I’ve used it as a comparison to mental health and depression,” she says. “It doesn't matter how badly bogged we get, we always take the time and trouble to get the vehicle out, we don't set fire to the machine. Sometimes we can get ourselves out of the bog but when it’s badly bogged, we need to ask someone to help.”

While the tight-knit nature of rural and remote communities can be a valuable source of connection and support, it can also influence men’s willingness to seek help for mental health concerns.

“It’s pretty hard to rock up to your doctors where you walk into a doctor's surgery and you know everyone sitting in the waiting room and they might not know why you're there, but you do,” Warren Davies says. “That plays a big part in making it harder to reach out and seek help.”

“We want the communities to have a deeper understanding that mental health concerns are not out of the ordinary,” Mercurio says. “In one footy team, there's six people that could be struggling with their mental health.”

Older men are more hesitant to access mental health programs due to stigma, lack of awareness about the benefits of mental health services and the inability to access services because of geographic isolation[2]. Stigma can be compounded for Aboriginal and Torres Strait Islander people and those who identify as LGBTQI+.

Those who do reach out for help sometimes find it’s not always easy to come by. Outside of large regional centres there can be a shortage of psychiatrists, psychologists and mental health nurses, with more remote areas seeing a shortage of GPs and community health nurses as well. Higher costs, fewer specialists, and greater distance to travel for care can also impact timely diagnosis, treatment and ongoing management of mental health conditions.

The social and emotional wellbeing of rural and remote Indigenous communities

Two thirds of Aboriginal and Torres Strait Islander peoples live in rural and remote areas[3]. As a group, our First Nations people have a particularly high incidence of challenges with their social and emotional wellbeing, with mental ill-health and psychological distress. On top of the risk factors linked to rural and remote living, ongoing marginalisation, separation from culture and land, food and resource insecurity, intergenerational trauma, disconnection from culture and family, racism, systemic discrimination, and poverty have resulted in poorer mental health for many Aboriginal and Torres Strait Islander people, along with their high prevalence of other chronic diseases[4],[5].

“Have the courage to reach in and start that conversation”

Independence, self-reliance and stoicism are some of the defining characteristics of rural identity and they’re valuable if you’re living life on the land. However, they can also be barriers to asking for help when the going gets tough[8] or starting a conversation with someone who might be struggling.

“We are the first ones to notice changes in our friends, our family and our work colleagues,” Mary O’Brien says. “If they've stopped catching up with their mates, if they quit the local footy team for no reason, or suddenly withdraw from family and friends, or excess alcohol and drug use or anything that's different from the way they normally behave, these are some of the things that we can look for.”

Social isolation is an important factor in mental wellbeing in people living rurally and remotely and having a support network you can call on, no matter the distance, is critical. Warren Davies found himself disconnecting from his community at his lowest points and says there needs to be more awareness and encouragement around how to intervene when someone seems off.

“It does take courage, and starting that conversation is really hard,” Davies says. “But if you don’t the outcome can be catastrophic. You're better off just biting the bullet and reaching in, and they can say they're all right but if you think they're not right, be persistent in that conversation and keep checking in with them.”

While the statistics are stark, there are opportunities for healthcare reform, community-led mental health literacy programs and the expansion of e-health services tailored to rural and remote communities.  “It is changing and I hope it's improving. Certainly, more people are talking about it now,” Mary O’Brien says. “I talk to men who say, ‘Oh, my father or grandfather never talked about this, but we check in with our mates now.’”

[1] Australian Institute of Health and Welfare. (2021). The health impact of suicide and self-inflicted injuries in Australia, 2019. Retrieved from https://www.aihw.gov.au/reports/burden-of-disease/health-impact-suicide-self-inflicted-injuries-2019