Around 10 years ago, at 36 years old, I was diagnosed with prostate cancer. 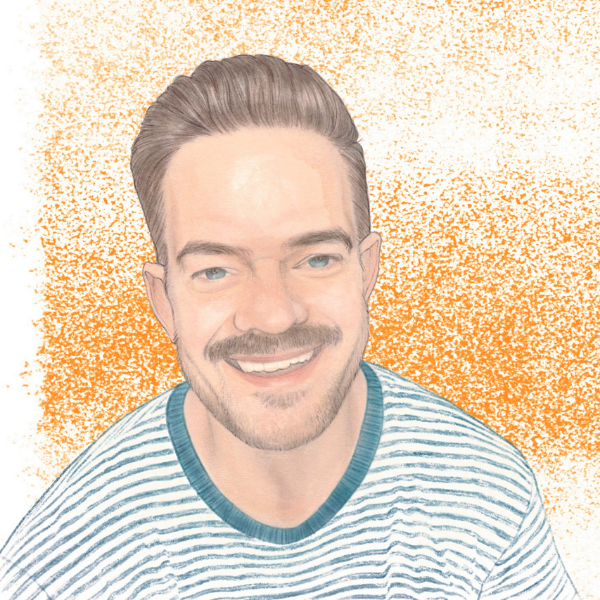 I was in a previous long-term relationship, we were living in Sydney, and I was working in the media industry. Life was pretty cruisy. But there wasn't a whole lot of direction. I was very much about getting through work during the week and living for the weekend.

Early that year my intuition was telling me to start getting a regular check-up after a little health scare. The GP said we’d check blood pressure and do a blood test to check cholesterol, iron levels, that kind of stuff. He also mentioned a PSA (prostate-specific antigen) test, which is used to screen for prostate cancer. He said it’s normally for men a bit older than me, but it was something we could put in the mix.

Weirdly, my PSA results came back slightly high, but my GP wasn't too concerned given my age. I did a couple of rounds of antibiotics over a few months in case the higher levels were caused by infection. My PSA level had gone up slightly, but nothing too dramatic. I was then referred to a urologist who tried another round of antibiotics. My levels remained slightly high. He said to me, "I'm 95% sure it's not cancer”. But he said he would be remiss in doing his job if he didn’t do a biopsy. That was a pretty uncomfortable experience, but still, I wasn't that concerned.

It wasn't until I got to the specialist’s office on the Monday morning and I sat in the waiting room, that’s where I started to get really nervous. My intuition was right…

The urologist was pretty straight with me, he said, "I didn't think that this would be the case, but I'm sorry, there is some cancer there." Honestly, you don't hear anything after that, after “you have cancer.” All the information was going in one ear and out the other.

I had no awareness of prostate cancer before my diagnosis. I’d heard the word "prostate" but had no idea what its function was even. I was getting pamphlets pushed in front of me that had 50, 60-year-old men on the cover who did not look anything like me. I had read up that the nerves that control your erections are wrapped around your prostate, and there's a potential for the surgery to damage them, for you to lose the ability to have an erection and have continence issues. I also discovered that I would need to do IUI or IVF to have kids in future, and even though I wasn't too concerned about that at the time, it all started flooding across my mind and I couldn't see any signs of reference to that in the pamphlets. It was very much men in the middle, or twilight of their lives and I started to think, "What's going on here? What's happening? Why is this happening to me?"

It was a somewhat aggressive cancer; it had a fairly high Gleason Score. And it was recommended I have my prostate removed. I took that on board, then went away and had to think about it. I got two more opinions. They obviously all mentioned the side effects but agreed that surgery was the best option given my age.

It was probably about three or four weeks afterwards that I had the surgery. The recovery was tough, both physically and mentally. It was much harder than I expected. And unfortunately, when the surgeon went in, the cancer was so close to the edge of my prostate he had to take the nerves on that side.

When he told me that after the surgery, I was absolutely gutted. He said I was young and he expected I would regain erectile function quickly, but it took nearly a full year for it to return.

Physically, I was obviously quite uncomfortable; wearing a catheter for a couple of weeks while you're still recovering from having major surgery… that was tough! Mentally for a 36-year-old man, it felt really demeaning too. Like I had lost not only a piece of my manhood but also a piece of my independence and freedom. Even after I had the catheter out, I still had to wear adult diapers for a number of weeks. I was going to barbecues with friends, knowing what I was wearing and wondering if anyone could see it. You're sitting there wondering, "Is everyone just feeling sorry for me." It was difficult. I just felt hollow. Straight out from the surgery, there was no sign of me getting an erection at that time either, or even a few months afterwards.

Taking medication like Viagra or Cialis is the first step to encourage an erection. It didn't do anything for me. You could also have an injection into the penis to try and stimulate it, which gave me some sort of an erection, but it was incredibly painful. There was no chance of me having sex. I was doubled over in pain, waiting for it to subside.

Because I had lost the ability to get an erection, the cracks that might've already been there in my relationship really started to show too, you can’t connect intimately in the way that you know and always have. In those months and years afterwards, my long-term partner at the time and I slowly drifted apart. Even when I eventually could kind of get an erection, it wasn't as it was before. I was different. And we had grown in different ways.

After that relationship ended, I was single for two to three years and had built up the courage to go on the dating apps. I didn't really enjoy the experience straight off the bat. I went on a few dates and met some nice girls, but it just didn't feel right. I moved roles at work and a new colleague said, "Look, I've got a friend, I really think you should meet." It was my now-wife Stacey, and the rest is history.

It probably was either the first or second date that I spoke of my experience having prostate cancer with Stacey, and it didn’t change how she felt. We continue to work through the physical and emotional problems we encounter, that's the kind of relationship we have. We always try to be open and honest with each other.

It was very early on that we talked about what each of us wanted in life, and kids were definitely up there. Before I had the surgery my doctor encouraged me to freeze some sperm for when I did decide to have a family. We did intrauterine insemination (IUI), or turkey basting in slang. It involves inserting the sperm into the uterus, close to the time of ovulation.

We actually conceived on our first try. But, got to seven weeks in, went to listen to the heartbeat and there was no heartbeat. We had a miscarriage, which was devastating. It really felt like it was all meant to be.

On the fourth attempt, we conceived Bryn, who is now 16 months.

When I was navigating prostate cancer surgery, at that age, I didn't see anyone like me, I didn't hear about many men my age having it. I couldn't find any research online or any blogs or anything from a bloke saying, "I got through this. You can get through it." That’s why I felt compelled to share my story in the first place. To help even one guy who comes across it and goes, "Shit, this guy's like me. I found someone who has gone through this and can show me that I can." It’s the same with starting a family, we wanted to share our story and we have a podcast called #CoupleGoals?. We talk about our experience conceiving Bryn and navigating life and love post-cancer.

Something I am big on promoting in myself is knowing that you are okay, just as you are. You are enough. Having prostate cancer and having my prostate removed, I eventually realised that it didn't make me any less of a man because of it. It’s taken a lot of adjusting and it takes a lot of self-work for me to maintain my equilibrium. But my main message for blokes is that you should have a self-care practice. You are worth the work.

Just going to your family, going to your mate, whoever it might be, and saying, "Hey, this is going on, and I'm not doing so well." That is so important. That is the real you!

Prostate cancer treatment depends on lots of things, like Gleason score, stage of the cancer, a man's age and general health, and treatment preference. Find out more about prostate cancer. Always chat to a health professional for personalised, medical advice.