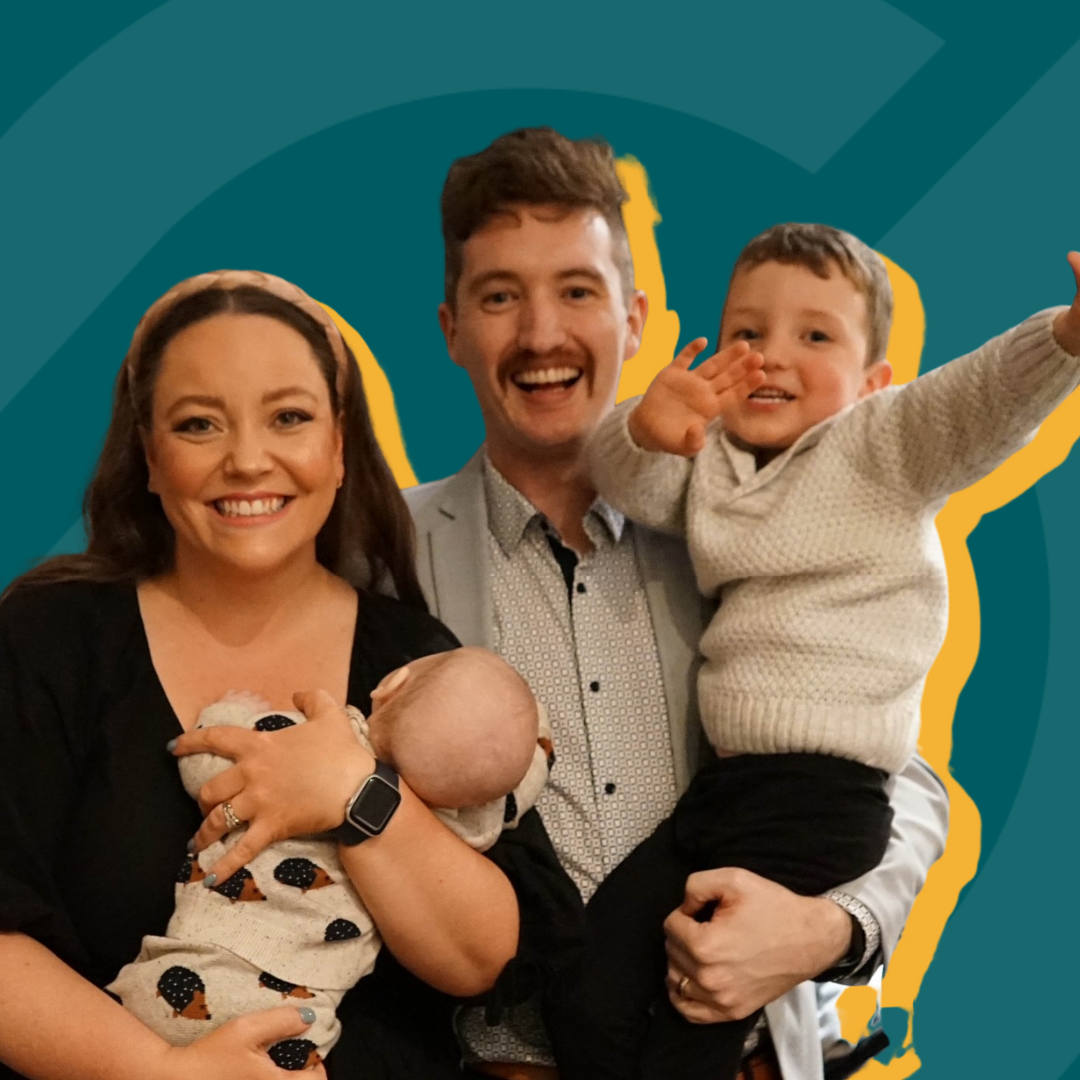 I was experiencing bleeding when I went to the toilet and I thought, well it's best to go get checked because mum had bowel cancer four years earlier. But I wasn't overly concerned, I was healthy and quite active. I went to the doctor purely for precautionary reasons because of my family history. I didn’t think it was going to be cancer.

I had a colonoscopy about three weeks later and they found a large tumour in my bowel. It was stage two bowel cancer. My wife was six months pregnant with our second child and immediately my thoughts went to how I was going to have to deal with this while she was going through the last stages of pregnancy. How do we juggle this?

It all moved pretty quickly. On Friday I had the colonoscopy, Monday morning I had an appointment with a surgeon and then two days later I had a second opinion with a different surgeon. But I never actually ended up having surgery. Both surgeons gave me the exact same prognosis and plan. I was going to do five and a half weeks of radiotherapy with chemo tablets and then have a little break. Then I was going to do an eight-round course of chemotherapy. The idea was basically to use radiotherapy and chemotherapy to wipe it all out and try to prevent it from spreading anywhere. Then once that was done, do the surgery afterwards. But we never got to that stage.

Once the first round of radiotherapy was done, we had a three-week break in between treatments, around the time my son was due to be born. In three-and-a-half weeks I went pretty quickly downhill. What we didn't realise at that time was that the cancer probably had already spread. I’d developed this cough over the time I was doing the radiotherapy and taking chemo tablets. It was just a persistent dry cough and I couldn't shake it. I just thought I’d caught something because my immune system was a little suppressed.

Then once I stopped treatment I got really bad. I couldn't walk 10 meters without being out of breath. My resting heart rate was between 80 and 90, and I usually have a resting heart rate in the high 40s to low 50s. So, something was definitely wrong.

I had a CT scan before my next round of treatment, which was going to be eight rounds of chemo, but my lungs didn’t look good. My oncologist was very concerned because he didn't know what it was. It was just a case of, "I don't know what it is, but if this is an infection, I can't start you on treatment because that could put you in a worse situation than you are now."

I had a bronchoscopy and other exploratory tests, I did a lung function test and I was a 40% lung capacity for someone my age. My oxygen levels were around 91 to 92, and I found out doctors get very concerned if it goes below 96. Eventually, I got worse and worse and after about six weeks I had another CT scan and it showed up that my cancer had spread to my liver and to my lungs.

Then the conversations started turning into making sure you get quality time with family and friends. Very different conversations than we'd had beforehand. I was no longer a candidate for surgery, based on where my tumours had spread to. We needed to start chemotherapy immediately to try our best to get it under control. Through genetic counselling, I also found out I have a gene variation that results in a very aggressive form of cancer. It’s very confronting when you find out that the average prognosis for people who have the gene variation that I have is nine to 13 months on treatment. The good thing is my doctor never gave me a timeframe, so to speak. Because he was just like, "Look, everyone responds differently, so we need to see how you respond to treatment first before we start getting into those conversations."

That was a very long drive home, and then having to call my parents and my wife's parents and have them come over and explain my prognosis to them. The part that I dwelled on the most at the time was explaining it to my four-year-old. He knew I was sick because I had a cough. We could sort of say, "Dad's sick. He's got this cough and he's trying to get better." It was something physical that he could associate with me being sick. But how do we explain that dad has something called cancer and it's spread around my body? And that it could mean that I'm not here in a short period of time? That was probably the toughest part to try and get my head around.

My wife had an incredibly hard time too. Thankfully she reached out to the Cancer Council and they were able to provide some fantastic support. Someone for her to talk to and it really helped her work through that.

In our follow-up meeting with the oncologist before I started treatment, he seemed pretty confident. I walked away from that meeting feeling a little more confident that hey, treatment is going to be horrible, it's going to be a rough couple of months or years or who knows how long, but it’s going to help.

I was extremely lucky that we've got a very good support network in terms of family and close friends who all live nearby. You obviously get the whole, "Let me know if you do anything." But really, people just did helpful things and they didn't sort of just say, "Let me know." It was like, "What am I doing for you? How can I help you? Do you need washing done? Do you need the kids looked after?” That really helped as well.

My employer was also fantastic. There was no need to worry about the financial stress of things. They had income protection policies taken out for me so that if I ran out of sick leave I knew that at least there wasn't a financial burden I had to worry about.

I quickly started fortnightly treatments and then after eight weeks, I had my first CT scan to see how things were progressing. I had a 50% reduction in the size of my tumours, which was an amazing result. The one on my liver went down half the size and the four nodules previously on my lungs went down to one nodule, and that nodule was half the size. We knew the treatment was working.

Every two months I had another scan and the lung ones completely disappeared, and then over the course of I think another probably four months my liver one was gone. Since November last year, I have been NED, so no evidence was detected of any tumours.

My surgeon also did a sigmoidoscopy to have a look at the primary tumour on my bowel and that's also gone.

I am on indefinite treatment, it's what my oncologist referred to as maintenance chemo. Because my cancer had spread there's the risk of it returning.

One of the biggest things for me was once my first scan came back with such a good result my oncologist told me I was healthy enough to go back into society, back to stay at home and feel free to see people and go out, because my immune system is holding up.

Also that I could go back to the gym and start exercising. That has definitely been one of the biggest factors in terms of how healthy I feel and how well I'm dealing with treatment. My gym community have really rallied and helped me greatly. Just being able to go every morning for an hour, chatting to people and getting a good workout has been great for my mental health as well.

It's weird to say I feel the healthiest I've felt in ages, while still going through chemotherapy and cancer treatment. I have chemo on a Tuesday and by Thursday morning I'm feeling good enough to get back into the gym.

There are different treatments being worked on and different technologies coming out all the time. The hope is in five years’ time the treatment I'm on might look very different and might be much nicer for me to handle than what I have to do at the moment. It's comforting to know at least that hey, there are professionals out there that are looking into the disease that I have and solutions for it.

It's hard to plan too far ahead because I sort of live in three monthly cycles with monitoring. It's a case of, once a scan result comes in then we can go, cool if things are looking good we can plan for some different things we want to do as a family.

The advice I've given to all my male friends is that if something's not right just go and get it checked, go talk to a doctor. If you talk to a doctor and they either dismiss it, or you don't feel confident with what they've said, you have the right to, A, push back and ask for something, or B, go see another doctor. You don't just have to settle for one piece of advice if it's not giving you that peace of mind that you're looking for.