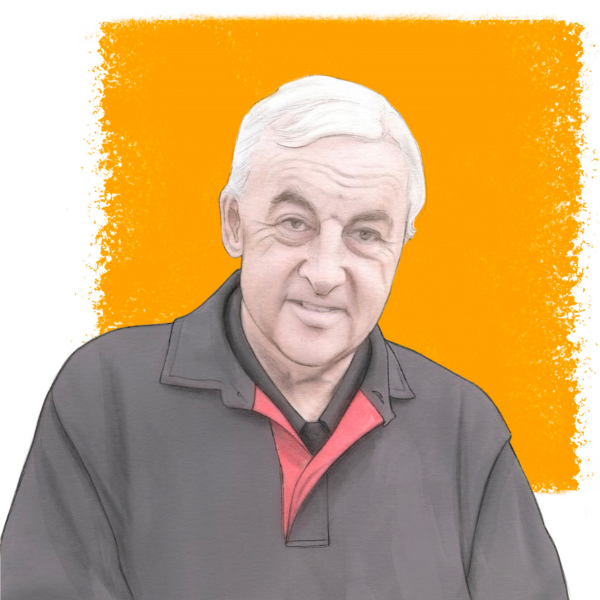 I was diagnosed with melanoma in 2009. I was 55 and in pretty good health back then, I played A Grade cricket until I was 46. I was a large animal vet, which is very outdoor and very physical.

I went to a clinic and saw a GP about something and at the end of the appointment, I asked, "By the way, can you please check this little lump on my scalp?" He had a look at it and said, "Don't worry about it, it's only an infected pimple."

I thought nothing more about it. Time went on and I was aware of this lump, which was getting bigger. It was catching in my comb when I was brushing my hair. It all dawned on me when I was having a shower and I was moving my neck around, thinking, "Gee, my neck's a bit sore at the moment.” I was self-massaging it and I felt a lump tucked in behind my right collar bone. My heart sank because, with my knowledge as a vet, I knew it was a regional lymph node and this was cancer, and it had spread from what I suspected on my head was, in fact, a cancer.

The following week I was presumptively diagnosed with metastatic melanoma. It was a wake-up call that my life would never be the same.

There were a number of twists and turns with my initial diagnosis, and it took them the best part of a month before they resolved or came up with an action plan. I was lucky that the cancer hadn't spread to my whole body, but it had spread through my head and neck region and I needed surgery. What I found was inaction and wasting time was what was eating my brain up and destroying me. I was living in country Victoria and commuting up to Melbourne to have tests and have appointments. It was rather time-consuming and difficult to organise.

Until that time, I was a very busy person. I was working full-time, and I was also working, probably 20 hours a week in addition to that, trying to finish a PhD. People shied away from me. They thought, without asking, "Oh, Bruce is a busy person, he hasn't got time to speak to me. We won't bother him. We'll just leave him alone." When I was diagnosed with metastatic melanoma, I realised that this was going to be bigger and tougher than anything I'd ever faced in my life previous to this and I needed help. But I also needed to change myself. I had to slow down, and I had to open up to other people. I had to invite them into my life for help, for conversation, for support, for feedback, and things like that.

Where I would have hoped and would have thought, that most family members would have rallied around the person with the cancer, that didn't happen for me.

I just had to dig deep and be strong and come up with other ways of handling a situation.

When I went back for my three-month check-up, I got the all-clear. I was full of happiness and joy. 10 days later my sister was diagnosed with terminal ovarian cancer. Suddenly my sister and I had a lot more in common than what she realised. We were never a loving family, but both of us having cancer probably drew us a little bit together and I supported her until the end.

When I was first diagnosed with melanoma I took six months off work, which was very fortunate, but when I returned to work, I had a new boss who, for some reason, hated my guts and made my life hell. After four months, I had a complete mental health breakdown due to workplace bullying.

In hindsight, I never really got the chance to come to grips with what was it like living and coping with life after a cancer diagnosis because I just got completely smashed as soon as I returned to work. To this day, and that's 11 years down the track now, I've still got massive ongoing mental health issues. It took me nine years of intense counselling to even start to get on top of the bullying, the anxiety, the depression, the post-traumatic stress disorder that this woman caused me to experience, and I've never worked since that day.

It was in the shadow of these mental health issues that I got my second metastatic melanoma diagnosis, 14 months later. It knocked the socks off me completely because I wasn't ready for it. I had more radical surgery and radiation therapy.

I believe I handled my first diagnosis and treatment incredibly well, but my second round of cancer diagnosis and treatment was a disaster. Not only for mental health reasons but also for lots of other reasons, that went wrong. With the radiation therapy, I had trouble finding accommodation. Instead of living rurally and commuting for my treatment, I needed to find somewhere to stay. I fell through the cracks quite badly on a number of occasions.

Before my sister died, she had been admitted to the hospital for her last dying days. We had some unbelievably amazing conversations. She said I should take our experiences and use them to make the journey for other cancer patients less difficult. That was her parting wish. I've taken that to heart and I started to get involved in a couple of seminars and then became a consumer representative at the Peter MacCallum Cancer Centre. I'm involved in six different cancer patient peer support groups and I am also involved in Melanoma Research Projects as part of their report writing and grant applications. I can bring my experience with cancer, but I can also bring my experience as a public servant and my PhD in scientific writing and writing reports.

When I was diagnosed with my cancers I'd never even heard of these cancer support groups, and I wish like all heck that they had have been running then. I learn quite a lot from listening to other patients and their experiences, and the experiences of their carers and loved ones.

A lot of the cancer patients in the melanoma group have only been diagnosed in the last four or five years. I'm living proof that, in fact, it doesn't have to be a death sentence, and even back in the dim, dark ages, before these fancy treatments, not everyone died. Some of us still live and I'm living proof of that, and that I'm still reasonably fit and reasonably active.

Melanoma is very secretive; it tends to hide, and it can spread easily without you knowing. Living with melanoma is trying to be aware of, but not alarmed about it. Being in tune with your body and doing self-health checks. This was very novel and something I've never even considered as a man. You’re a melanoma patient until the day you die, you might not die of melanoma, but you die with it — that’s the cliché people use.

I’ve recently been diagnosed with prostate cancer. I had had some PSA blood tests done about five years ago, and they were high-normal, and my urologist said we’ll keep an eye on it. I must admit that I just got on with the rest of my life and forgot about it. My GP did not have me on a system where I was having an annual health check-up, which would have included a PSA. It was actually only by accident in February of this year. I was having mental health issues, and I could suddenly see myself falling apart.

I got myself referred and admitted to the hospital and as part of the admitting blood profile, the doctor requested a PSA. That PSA, in five years, had doubled to 9.8. On that basis, finished my time in the mental health facility and then go back and see my urologist. After blood tests, a scan and biopsies I decided to have a radical prostatectomy. My two children are grown up now and have stepped up to the plate to support me. They've been with me at my appointments at Peter Mac, and they are 100% behind me. That has just been breathtakingly enlightening and uplifting for me.

I think I've been realistic. I've been proactive and I think I've got my head around it. I'm ready to face whatever that brings. Cancer, it's still a mystery for a lot of people out in the community. Just because you get diagnosed with the word starting with the big C, it does not have to be a death sentence. You're not the only person in the world who has had this diagnosis. There are a lot of people out there who want to help you, and who can help you, you just have to realise that and not be afraid to open up and ask for help. It's not an admission of weakness to do so, I would argue it's actually a sign of strength that you are mastering your thoughts and your feelings and your emotions, and you're taking control of what's going on. You are empowering yourself in your diagnosis and treatment when you enrol the help and support of other people.

You're not alone and ask for help because people are just busting to help you if only you let them.