Fiona on supporting a partner with prostate cancer 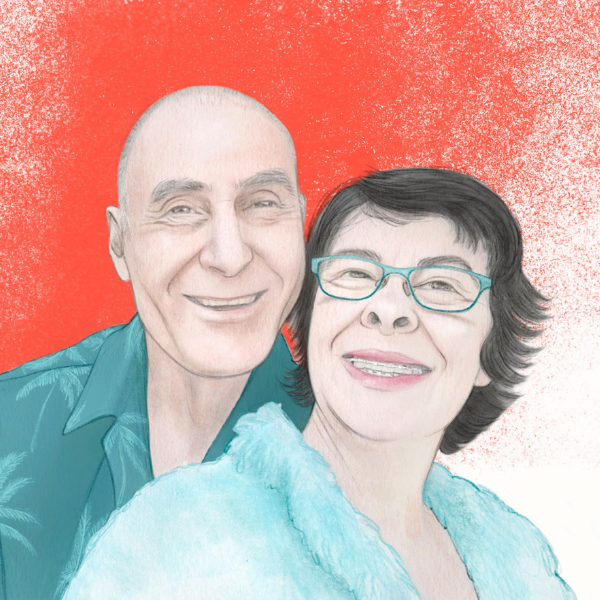 My husband Alan had been diagnosed with prostate cancer 10 years earlier and he was on active surveillance when we first met. I didn't really know a lot about it and didn't really pay much attention to it. He was getting his regular blood tests and making sure that his PSA levels were okay. That changed when one of his blood tests showed that the numbers were heading in the wrong direction. His PSA level was still quite low, but his “free to total PSA” ratio was below 25 per cent, which meant it was in the abnormal range. The free to total ratio can indicate whether an elevated PSA is more likely due to a benign (enlarged prostate) or a cancerous cause.

Alan went to visit his urologist who organised a biopsy. We both went along to get the results. The urologist was joking away with Alan and then, all of a sudden, he said something about the cancer being back. I thought he was still joking, so it was quite a shock, really. I was absolutely terrified, and I just thought, "Oh my God, I'm going to lose my husband. We've only been married a couple of years. He's only 60. It's ridiculous." The urologist was ready to book Alan in then and there to get his prostate out, and I was quite keen for him to go ahead and do that because I was so frightened. But Alan said, "Hang on a minute. I need a bit of time to process this. I need to think about my options." I found it a really difficult time because it was hard to know how much I should be involved, and how much I should step back and let him make his own choice.

Alan's very open. I always know what's going on. He's a very emotional man, so there were tears, and there was anger, which of course is always challenging. That was a roller coaster to go through. It looked like he was keen on brachytherapy at one point — a type of internal radiation therapy in which a radiation source is placed in your body, in or near the tumour —because it would delay the side effects. I remember looking at the information that we got from the hospital, and it said things like, "Don't hold a baby," because of the radiation, and I'm thinking, "I don't like the sound of that. We sleep next to one another." I was a little bit concerned, and I didn't really like that option very much. But I thought again, I don't think I have the right to tell Alan what to do or not do here.

I don't remember whether we even discussed if I would go to the appointments with him. I took it as a given, because it was such a serious thing and I needed to be there as his support. When you go to a medical appointment, it's quite common to forget stuff. Having an extra pair of ears and also being able to ask questions, even if they weren't necessarily answered, was good.

After more advice from the urologist, Alan decided to have a radical prostatectomy. To be honest, I was less concerned about the side effects. I was much more concerned about him surviving. I thought, "Whatever comes after the surgery, we'll deal with it when it comes." I know that Alan was a lot more worried about side effects than I was, but I just thought, "I want my husband. I don't want him to die.”

During the recovery process, we were both exhausted because Alan couldn't sleep very well when he had the catheter in; it's hard to sleep with something dangling out of you. In the beginning, he needed to go to the toilet with the catheter and he couldn't really bend very well, so I had to come with him and help him empty the catheter, which was fun and games. It was a tiny little toilet, so it was very intimate, very squeezy, but we decided to make it into a bit of a joke: ready, aim, fire kind of thing. We used a lot of humour to try and deal with the situation, but I know it took a lot out of us both because we weren't sleeping well. There was a lot of emotion involved. Alan was terribly emotional, and that of course made me feel very emotional. That really took its toll.

In terms of how it changed our sex life, I didn't really know what to expect in the beginning. We learned things along the way. Like the fact that a man can have an orgasm without any erection whatsoever; we discovered that pretty quickly. I was more patient because I think I'm a more patient person than Alan generally. He very much wants to get on with it and wants to fix something immediately. I knew that this was going to take time, and it’s a process that unfolds over years.

Alan runs a prostate cancer support group and I've met so many men and their partners. I see many people who give up and they just decide it's all too hard, pardon the pun. I mean, I can't lie and say that sex is as good as it was beforehand because it isn't. It's different. It's still enjoyable, and there's different aspects of it that I enjoy. But the physical sensation is entirely different, and we don't have the blessing of spontaneity. The most useful thing that we've found is the injections. That's the most successful thing that we've discovered, but we use other things as well. Alan does have a vacuum pump, and we both have vibrators. He says the most important thing of all, actually, is the brain. It's been a real process, a very long-term process of exploring and trying different things. We find that if we throw a whole lot of different stuff into the mix, it usually works better.

There’s also the intimacy aspect, which isn't physical. My experience over the years talking to men and their partners shows that this is an area that is so painful. There are so many men who now have no sex life, but they've also lost a great deal of intimacy because their intimacy in the past had been so bound up with sex. Now that they don't get the touch that they used to get, they don't have that sense of connection with their partners that they once had. That's another aspect which doesn't get talked about as much.

Alan recognised he needed help with his mental state. He’s been involved in healthcare for such a long time, he exercises every day, he really looks after himself. Unfortunately, he kept going around in this loop about, "Well, why didn't I pick this up earlier? Why didn't I do this? Why didn't I do that?" And that was just a fruitless exercise, but he kept doing it, and he kept being upset, angry and getting snappy. Eventually, he worked out that he was stuck.

Because he's a Vietnam war veteran and had been previously worked with the Vietnam Veterans' Counselling Service, which is now called Open Arms, he rang them and said, "I think I need to come back for some more counselling." It helped him to reset, and to focus on the things that he could change and accept that he made the right decision, given the circumstances and the information he had at the time.

To look after my own wellbeing, I spent a lot of time in the garden. Also, we feed a family of local magpies. That was a great way to de-stress. I also spend a lot of time beading. I make jewellery from beads and I found that that helped me to get my mind off what was going on. This is not to say that we don't have our challenges. Alan also is a Reiki teacher and he taught me years and years ago to practice Reiki. So we've incorporated that into our “wellness toolkit”. And when we get particularly snitchy with one another, one of us will say, "I really need some Reiki," or, "You really need some Reiki." Then we'll get the massage table up, lie down, have a session, and we feel so much better afterwards. So that's been a great maintenance tool.

What didn't help was allowing ourselves to get caught up in the negative emotion, because of lack of sleep and general stress, we could quite easily have had a lot of arguments, really nasty arguments. But there was a lot of deep breathing, and counting to 10, and all that sort of thing, which helped. I found that becoming more involved, learning more about prostate cancer, and talking to other people, helped me. I didn't go along to a support group for women, because while there was one for a brief period here, I didn't feel much connection, because I was a lot younger.

For Alan, it's helped him being able to talk to others about it. Writing a book about his experience and getting it down on paper helped him to get things out of his head. He really wanted to share his story and help other men to navigate their own prostate cancer journeys.

People have to realise that you won’t spring back immediately after surgery or after treatment; it really is a long journey. You just need to be kind to yourself, supportive, caring, and understanding. If you find that you're really not dealing well with it, definitely get expert help.

To a certain extent, for people who haven't gone through prostate cancer or the support process, I don't think they really understand. Because men don't talk very much out in the open about it, it's not seen as being a big deal, whereas I think it's a huge deal. My message to men is please open up, please talk more, please share more of your experiences. Be open to talking about things that are a little bit uncomfortable, like what's going on with your waterworks, and what's going on in bed or not. Because you might find that there's someone in a similar situation, who's got some great tips.

The Prostate Zone provides resources to support and inform anyone going through prostate cancer as well as their loved ones.