Author, counsellor and men’s health advocate, Alan White, was diagnosed with early-stage prostate cancer a few months before his fiftieth birthday. Ten years later, the cancer returned. Now, as he approaches his seventieth birthday, he reflects on the treatment decisions he made at the time. 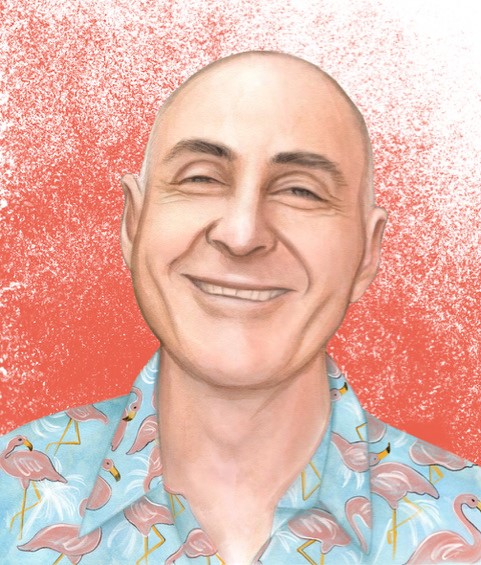 Twenty years ago, I was diagnosed with early-stage prostate cancer. I had a Gleason score of 6 at the time. This score is a way of grading the severity of the cancer. The higher the score, the more likely that the cancer will spread and grow. With a score of 6, the cancer cells are very unlikely to grow. Despite this, the standard treatment at the time was to remove the prostate through open-cut surgery.

I did some research and realised there were some serious consequences from the treatment. Death was a possibility, but that didn’t concern me as much as incontinence and erectile dysfunction! These weren’t things I wanted to deal with before I’d even hit my fiftieth birthday. I pushed back and told the urologist I needed to think about what I wanted to do. In the following months, I made some significant changes to my diet and lifestyle. When I next met with him, I asked for one more biopsy to confirm that the cells were still cancerous. This test came back showing that the cells had very little chance of spreading.

As a result, I was put on what is called active surveillance – I had regular blood tests and a yearly physical check with the surgeon, including a digital rectal examination to examine the surface of the prostate. The idea was to keep an eye on any changes in the prostate gland.

In early 2011, when the surgeon examined my prostate, it felt firm. He ordered a biopsy and when my wife Fiona and I met him for the results a week later, he had his nurse come into the consultation. I thought that was a bit strange. He said, “It’s come back”. I was dumbstruck. My mind went blank. My Gleason score was now 7. While some of my prostate samples scored 6, there were also some at 7. This suggested that the cancer was more aggressive and more likely to grow and spread. The urologist said the prostate needed to come out. Once again, I told him I wanted to go away and think about this.

I explored the option of radiotherapy as an alternative to surgery. After some deliberation with Fiona, we decided against this treatment, because if the radiotherapy is unsuccessful it makes surgery much more difficult. I had another conversation with my surgeon and decided to go ahead with the operation. He booked me in to have a robotic prostatectomy. This is removal of the prostate, with the surgeon controlling the robotic arms that do the work. The surgeon joked to his nurse that she should tie me down to the chair to sign the paperwork before I ran away!

Fiona and I had only been married for a few years at this stage. We managed to sneak in our third wedding anniversary celebration just before surgery. We had to navigate all sorts of challenges together during this period. For example, after the operation I came home with a catheter, which meant that a tube was coming out of my penis. I was bruised and sore. Fiona had to help empty the urine collection bag early on due to my very sore abdominal muscles, which made it difficult for me to bend over. It wasn’t exactly romantic!

I remember placing an order for incontinence pads after surgery. What was delivered was something that looked like a huge baby’s nappy. I quickly exchanged these for something a little less chunky. There were ongoing leakages in the months that followed, which were embarrassing. Ten years after surgery, I now consider myself to be 99% continent.

The other main issue was erectile dysfunction. It’s not something that was front of mind initially, but we started to think about it a few months after surgery. Our sex life started to need more planning. I tried various things including medication, injections and pumps. It wasn’t just about the mechanical issues — there was the question of confidence in myself as a man, and being able to maintain intimacy with my partner. To top that off, I found I had lost penis length and girth, and now my orgasms were painful. I also needed to adjust to no ejaculation of sperm. Sex was now a dry run, not that we were contemplating having children. I’m very grateful that Fiona didn’t see me as any less male because we couldn’t do what we used to do. She has been so engaged and supportive through the whole process.

A year after treatment, I realised I wasn’t travelling well mentally. I took myself off to a counsellor to work out what was going on. Amongst other things, I was questioning whether I’d had the right treatment. The counsellor explored my concerns. She gave me a statement that read, “I made the right decision with the information I had available for me at the time”. It still sits on my office wall. Reflecting on that statement really helped me reconcile things. The new treatments coming out now are fantastic and occasionally I find myself wishing I could have had that option at the time. One thing to understand is that, for all treatments, you must meet the criteria. Not every treatment is suitable for all men.

I realise now that I wasn’t alone in facing these dilemmas. With low to medium-risk prostate cancer, there are generally several treatment options. Depending on your situation and the cancer’s stage, these options can range from active surveillance to various types of surgery, as well as radiotherapy and hormone therapies. It can be quite hard for men and their loved ones to decide which options to take up. There are all sorts of possible short and long-term effects to take into consideration. Having to make decisions quickly can cause a lot of anxiety for many men — and possible decision-making regret down the line.

I’m now involved in a trial called NAVIGATE, which is being run across various hospitals and centres around Victoria and throughout Australia. It’s testing an online decision aid tool for men, and their partners, to help them make decisions about which prostate cancer treatments best suit their circumstances and values. It walks them through the main side-effects and implications of each treatment option. When the NAVIGATE tool is publicly available in the near future, I know it will help give men a bit more control over the available information. I think it will empower them to make informed decisions and suffer less decisional regret.

When making decisions about treatment, I encourage men to find out as much as possible about each of the options available to them. This includes side-effects, recovery period, costs, and realistic life-saving prospects. While knowing these things doesn’t necessarily make the treatment easier to deal with, at least men have a better understanding of the consequences of the decisions they make. I believe it makes those decisions easier to wear.

If you are unsure about your options, it doesn’t hurt to get a second opinion. Through this experience, I’ve learnt that it helps to get to know your individual situation, ask questions to understand what your results mean, and do your best to make a decision that feels right for you.

Prostate cancer treatment is decided on several factors, including Gleason score, stage of the cancer, level of PSA in the blood, and other factors such as age, general health and treatment preference. Find out more about prostate cancer.

For continence issues, visit the Continence Foundation of Australia.