Nick on removing the stigma around male breast cancer 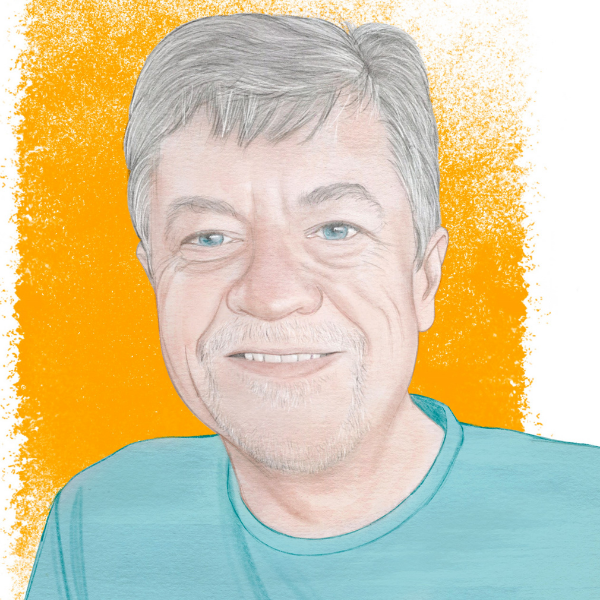 I didn’t know anything about male breast cancer, so my diagnosis in April 2021 came as a shock. I live in Queensland and have a company specialising in management consultancy, business development, sales and marketing, and general management. When I first noticed the lump, I was in Victoria for work and staying at my sister’s place. One morning after a restless night’s sleep I noticed a bit of a lump on my right breast just to the right of where the nipple was. It was about the size of a 5-cent coin, hard and a bit tender. But I thought, "Hang on a sec, and that's when I walked into the branch cutting the grass couple of weeks back.”

But I thought I'd better check it out so when I got back to Queensland, I went to the doctor and fortunately, the doctor pushed for it to be investigated. I was really grateful for that. It could have made a difference.

Leading up to the biopsy, I was still thinking, "No, it's definitely from walking into that branch. It hurt quite a bit." I was in the last week of my work contract and I got a phone call — we'd been up at the Sunshine Coast for the weekend for a friend's 50th birthday. We had a lovely time, and we were saying goodbye to everybody, and I took the call from the doctor and she said, "I have to tell you that it's actually cancer." That really rocked me. I thought, "What do you mean?" She explained to me, "We think it's fairly early," and then these are the steps.

I was going to drive back to Brisbane, but my wife drove. I was in shock for about an hour and a half, thinking of the consequences. Your life flashes in front of you. Since then, there have been some dark moments, particularly a couple of weeks after that, with the realisation of what it meant. Then I thought, "Okay, now I've got to deal with it. Let's get on with it."

I often think the worst and I'm probably a bit of a worrywart. My youngest daughter is getting married in two years’ time, and she was looking at all the venues and I said, "If something does happen to me, don't worry, I've got my insurance, so I'll pay for all of your wedding." That wasn't the thing to have said, I wish I hadn’t. But you explore all the issues of dying and then you have to deal with, potentially, mortality. I was thinking about my ashes and how you want to help your family before you go. It went from one extreme to the other, before I said, "No, this is just not right." Focus on the positives, not the negatives. The positives were that I had a very good prognosis. So, I stopped thinking those thoughts.

The prognosis was good. It was diagnosed on the 27th of April, and I was operated on on the 6th of May. I said, "No stuffing around here. Let's just push it right through.” During the surgery, they found that the first lymph node had some cancerous cells, but not enough to register and the second one had none at all. The cancer was completely removed but for insurance purposes, my oncologist strongly recommended I undertake chemotherapy. I've now had six sessions of chemotherapy, three weeks apart. It started in June, and just had my last one, last week. You've got to put your life on hold, but I'm very lucky. I'm very grateful. The support has been fantastic.

I think the important thing is, don't be afraid and we need to remove the stigma. It happens to everybody and it's on the increase for men, and we all need to be more aware of it, and we can help each other.

The level of support for women with breast cancer in Australia is one of the highest in the world. I would say that the attitude right across the spectrum from health care workers, the initial nurses, particularly breast cancer nurses, my oncologist and surgeon — they know that men get breast cancer and I've had nothing but the best support and understanding of it. That has been very reassuring.

The issue that I've discovered, and initially I was a little resentful about it, was that all the marketing material, all of the exercises, all the resources out, there is designed to assist you in terms of understanding what breast cancer means and the side effects, are all focused on women. There's no reference in the marketing material that the men also get breast cancer, but notwithstanding that, in some ways, there's more sensitivity. I felt that I really was being looked after because I was the 1%, not the other 99%.

My sister’s partner was diagnosed with bowel cancer five or six years ago. My sister said to me that exercise is very good for those going through cancer and maybe you could look at doing a program and get involved in a study. So, from the beginning, I read up about it and the research about exercise improving the effectiveness of chemo and improving recovery. I joined the University of Queensland trial and I've been part of the study program since day one. That has certainly been very beneficial. A day after my surgery I did 1.3 kilometres of walking around the ward.

I got onto the Breast Cancer Network Australia and talking to other people certainly really helped me. Talk to other guys that have already had breast cancer and the experience. I found that was very reassuring and comforting to me.

My advice to other men who have been diagnosed with breast cancer is don’t be afraid. Listen to all the experts and the people around you because they all care. Be grateful for the fact that Australia has a very good level of service and we have some of the best facilities in the world.