In 2016, Joe Bakhmoutski was diagnosed with testicular cancer. Since then he has set up Simplify Cancer, a site that includes a podcast, videos and a book about finding better ways of dealing with cancer. He is passionate about helping people who have been diagnosed with cancer to stay on top of their worries during treatment and beyond. He tells his story here. 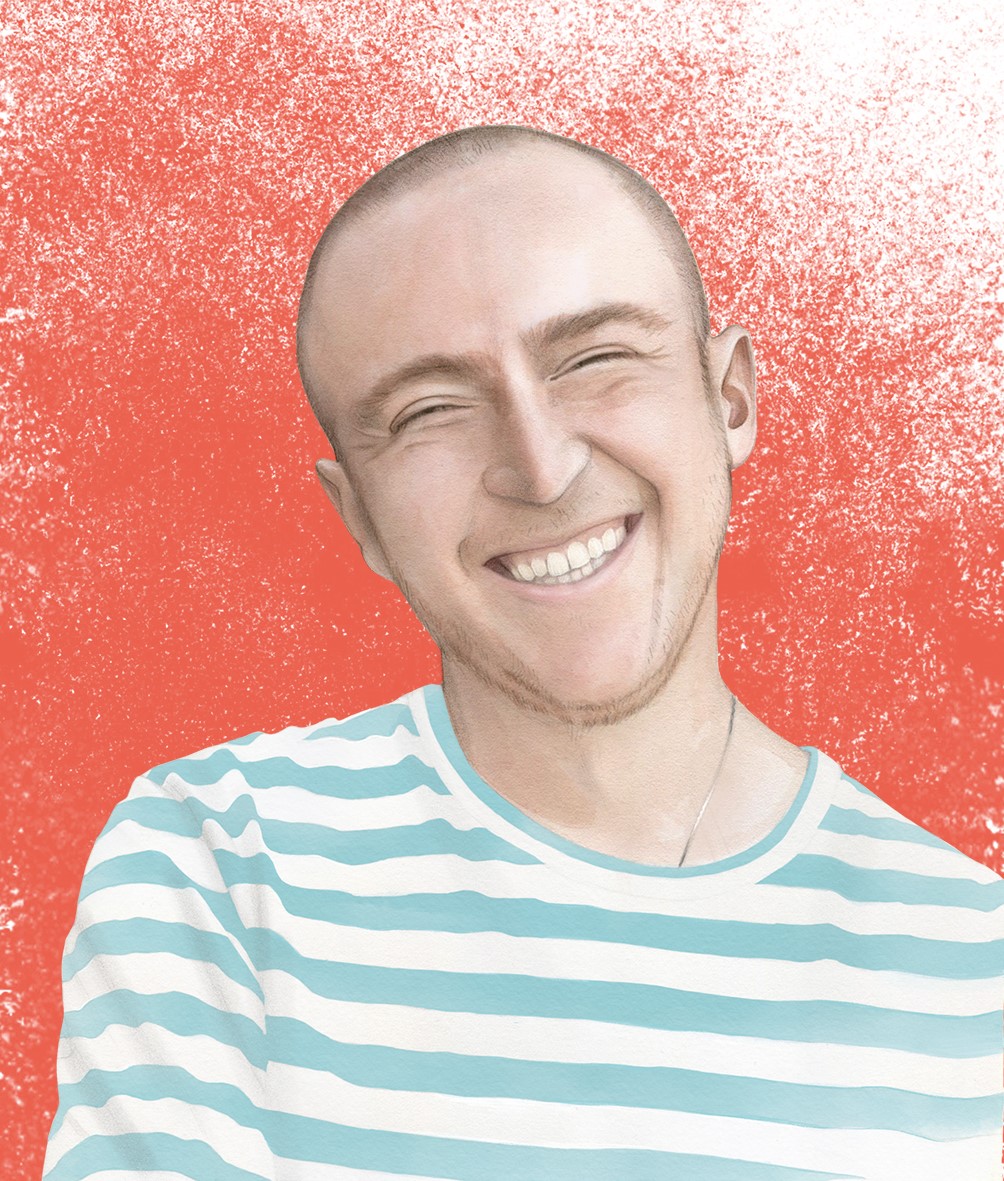 I was in the shower when I felt a hard lump in one of my testicles. I remember feeling something was really wrong and I became numb with fear. I raced to my doctor later that morning. She did a physical examination, asked about my medical history and sent me to have an ultrasound. I went from there to work and when I came out of a meeting I had three missed calls from my doctor asking me to come back in. I went in and she had organised for me to see a urologist* later that day. The word cancer wasn’t mentioned, but by now I suspected it was on the cards.

The urologist reviewed the ultrasound results. He then did a physical examination, feeling my testicles and my abdomen. It felt a little weird, having your balls touched by a stranger who wasn’t your lover! Still, he didn’t make me feel uncomfortable. He then sat me down and said, ‘’I’m sorry to say this, but it is cancer.’’ I went blank. He went on to explain what testicular cancer was, my treatment options, and that I would need an operation called an orchidectomy, which meant that the cancerous testicle would be surgically removed. Once the testicle had been removed, it would be sent off for more tests to confirm the stage and type of cancer. He would book the operation in for four days’ time.

I was shocked. I couldn’t take in the magnitude of what he was saying. I didn’t have time to process everything and a lot of the details slipped past me. I had to fill in a big batch of forms and he ordered more tests, including blood tests, a chest x-ray and a CT scan.

I walked straight into the nearest café and ordered a coffee. Thoughts were racing in my head. I can’t believe this is happening to me. Am I going to die? If I’m going to have chemo, will I still be able to work? Will I still be able to play with my toddler? Can I still have sex? How do I tell my wife, my mother, my colleagues?

My wife knew I was going to the doctor. She had gone to work thinking it was a false alarm, that everything would be okay. I tried to calm myself before I called her. When I told her, she was shocked. She didn’t know how to react. But she was so supportive, then and now.

Follow up tests showed that the cancer had already spread to my lymph nodes. I had to see an oncologist**. There’s nothing like seeing an oncologist to bring it home that you have cancer. He explained the various treatments available to me given the stage and cancer type, including radiation and chemotherapy. He gave me options and I thought to myself, ‘’Hey, do you expect me to make the decisions? I’m just a regular guy!’’.

I realise now that no-one knows you like you know yourself. While I relied on my treatment team for information and expertise, I knew I had to be the one to make the decisions if I wanted to have some control over my life. It was a turning point for me because I didn’t want to be passive, I didn’t want things to just happen to me during the process. I wanted to get back some semblance of control at a time when things felt pretty out of control. I decided on a nine-week cycle of chemotherapy over six months.

Before chemo started, I took our two-year-old son to his favourite park. We spent the whole day there. I bought a picnic, we had fun chasing seagulls. I thought to myself, “How do I tell him? He’s just a kid”. I couldn’t bring myself to do it, but now I wish I had.

Before the chemo, my oncologist offered me the option of putting sperm away for storage, as it was likely that the chemo would affect my fertility. It felt a little awkward to have these conversations. I just took it for granted that I would be able to naturally have children when I chose to. And it’s hard when that vision of myself didn’t match my reality. My wife was incredibly supportive and I just had to keep reminding myself that this wasn’t my fault. We decided to go ahead and put sperm in storage should we decide to have another child later.

The chemo process was gruelling. The worst thing was chemo fatigue. It felt like my entire life force has been drained. There were times when I felt like I was exploding inside — no other sensation comes close to describing it. Managing the side effects was tricky. There was a lot to balance, including managing pain, dealing with wakefulness in the night, nausea and loss of appetite.

During that time, our son knew something was wrong. When he couldn’t come into hospital, we had Skype conversations and he could see how ill I was. I felt his hurt, that he somehow sensed we were keeping secrets from him. In the end, we talked to him about it. We said, "Dad has cancer. It's a bad disease and the medicine makes Dad feel bad. But we are going to have very special toys that you'll only have at Dad's hospital when you're there!". Things shifted after that. For example, we were going to have his third birthday at home but I was too ill to be there. We ended up having it in the chemo room. My wife was there, my mum had baked a cake, the oncology nurses sang happy birthday. It felt really good. We worked around what was going on and it became like a ‘new normal’.

During cancer, even one worry made my head spin. It triggered another worry, and another, until it was all I could think about, even if it didn’t make any sense. For example, in the early stages, I told myself that my wife will probably leave me and that I would lose my job. But I ended up speaking with people that had lived through cancer and that changed things for me.

I had a few side-effects after treatment, such as neuropathy, a tingling in your toes and fingers. It was quite painful. After a few months this went away. My hearing also started playing up after chemo – or at least that’s my excuse now when I miss something my wife says! I also put on a lot of weight because of the steroids I was on while having chemotherapy, which made me eat like crazy. My oncologist told me that putting on so much weight put me at risk of getting heart disease. I saw a nutritionist who specialises in treating people with cancer. She helped me with dietary advice and an exercise plan. I’ve since lost a lot of weight and have a lot more energy. Eating well and exercising are now part of my daily habits.

We went through IVF to have a second child. It was complex, expensive, and we had to jump through lots of hoops. It was particularly hard for my wife, with all the cycles of hormones. But it’s been amazing — because we now have a new addition to the family, our second son and miracle baby, Max.

It was scary and confronting being diagnosed with cancer. Testicular cancer has a good recovery rate. Thankfully, six weeks after the chemotherapy was done, tests showed there was no sign of the cancer. But no one knows how things will go in the future. I have learnt to live with uncertainty, and have had to work out how to manage that in my life. It’s helpful for me to know that there are options should things not go to plan. I could try different chemotherapy, have other operations, and participate in various clinical trials. I still have regular check-ups.

Having cancer has changed my life. I think we tend to go through life like we’re invincible. I look at things in a completely different way now. I have connected with a feeling of living in the moment, and I realise I can’t put important things off until later. I often ask myself, ‘’What if this is my last day, what would I do?’’. It helps me prioritise what is important. The noisy distractions fall away and I am much more present and focused.

Having cancer has helped me think about the legacy I want to leave after I’m gone. How will I be remembered? The natural place to start for me is to try and help others who are going through this. In setting up Simplify Cancer, really the essential question I am trying to answer is ‘’How can you have cancer and still have your best life ever?’’

*A urologist is a specialist surgeon who treats problems of the kidneys, bladder, urethra and adrenal glands. Urologists also deal with problems concerning the penis, testicles and prostate gland.

**An oncologist is a specialist doctor trained to investigate, diagnose and treat people with cancer or suspected cancer.